University of Southern Queensland has emerged as a national leader in composites research, with an explicit focus on real-world, industry-based problems. Brent Balinski spoke to the university’s Centre for Future Materials Director Professor Peter Schubel about some of its recent work, and why it makes sense to work together rather than compete.

After four years of brisk growth the USQ’s Centre for Future Materials achieved a satisfying number one ranking last month.

Based on a tally of citations in the top 20 journals in five years, The Australian’s education section ranked CFM at the top of the nation’s composites research institutes.

Is there a friendly rivalry felt by the young upstart towards other hubs of composites expertise, such as Deakin University, UNSW or the University of Queensland?

“They’re definitely not classed as rivals. They’re classed as friends,” Professor Peter Schubel, who has headed the CFM since it began in 2016, tells @AuManufacturing. He agrees that you’ve got to pick your battles wisely.

“Australia is such a small player in the manufacturing world that there is no room for rivalry in your own sector. So my remit is actually to make sure that people operating in the same sector come together.”

Schubel’s group at CFM (he has also been Executive Director at the university’s Institute for Advanced Engineering and Space Sciences since 2018) has tripled in size in its four years, now at 68 researchers and 16 academics. The focus is applied research, according to its website, “not an academic interpretation of what industry may want.” Each project has an industry lead.

Investments have included $1 million in lab infrastructure in 2017, $1.5 million in analytical equipment in 2019, and over $2.5 million in industrial-scale manufacturing equipment this year. In the first quarter of 2021, it will take delivery of “Australia’s most advanced six-axis filament winder,” says Schubel.

This is for the purpose of developing linerless tanks, with interest from clients wanting to develop products such as rocket fuel storage tanks and (on-earth) hydrogen tanks.

Linerless or Type V pressure vessels (the machine will also be used for Type IV plastic-lined tanks) offer lightweighting that is particularly appealing to space businesses, where even modest reductions in mass translate into fantastic amounts of value. Such tanks have been called “the pressure vessel industry’s holy grail.” 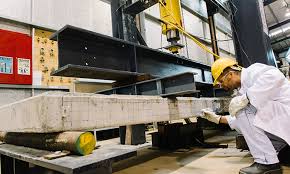 “They’re [also] operating at minus 230 degrees C and under significant pressure and obviously have to endure the rigours of space, and actually have to be a defect-free component so that you don’t have a rupture of the tank and catastrophic failure,” says Schubel of the challenges involved.

“You have to manufacture that in a consistent way. The first tank you make has to be the same as the last.”

According to Schubel, around 15 companies have expressed an interest in working with his group after they announced the move into filament winding.

Industrial research at the centre comes under four priorities: advanced composites manufacturing, functional materials, civil composites, and geopolymers/concrete. There are 27 active industrial research partners, and a testing service the CFM runs is used by roughly 1,000 customers.

Programs include two CRC-Ps, one with Wagners Composite Fibre Technologies on pultrusion of construction materials, and another with Austrak on composite railway sleepers and transoms.

Work with Graphene Manufacturing Group is using an “exotic” version of the 2D material for “multifunction sensors,” enabling structural health monitoring of composites.

Research with the United States Air Force is developing UV-activated “shape memory polymers,” with potential applications in morphing wing structures for aircraft or self-erecting lunar habitats. (Another recent get for the university was Dr John Russell, Chief of the Structures Technology Branch at US Air Force Research Laboratory, joining as an adjunct professor.)

A flagship project is around next-generation aircraft repairs for composites, in collaboration with DST Group. This has been in two parts, says Schubel. The first is an on-plane, low-temperature, out-of-autoclave repair method for composites, using a “novel vacuum bagging process.” The second is the subject of a recent patent application on a process for additive manufactured patches, typically using titanium alloys and invar and matching the properties of the part being repaired.

“Very interesting metal matrix technology has gone into this development, so that we can actually graduate the mechanical performance of the repair patch and that is sort of where the patent actually lies, around how we generate that graduated mechanical strength,” explains Schubel.

“Some of the results from that indicate that not only can we do the repair in a tenth of the time as opposed to traditional repair practices, but we can also do very complex geometric shape repair…

“You don’t need pre-preg sitting in a freezer and all this type of stuff for the repair. Also, mechanically, we’ve already demonstrated that it delivers essentially double the peel strength as opposed to a traditional repair patch and perfectly matches the parent mechanical properties of the substrate.”

A recent drive is into recycled composites, with CFM part of two recently-submitted applications for CRC-P Round 10 projects.

Schubel says that carbon fibre is the most viable composite material to recycle right now due to the value of fibres. The economics aren’t right yet for cheaper composites such as e-glass and thermoplastics, but hopefully will be in time. 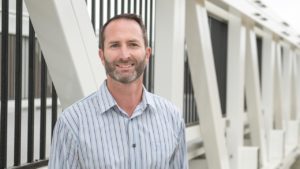 “Australia is such a small player in the manufacturing world that there is no room for rivalry in your own sector.” Picture: Daily Mercury

As for where his group specifically — and Australia generally — should focus with recycling composites, he says that we need to look carefully at where efforts are best-spent.

“Australia could either take a decision to take a lead on it, or it could actually utilise the process of actually just waiting to see what somebody else’s developed and adopt that technology. I’m also very mindful of not reinventing the wheel,” he says.

“Some — particularly the European research outfits — have got years of headstart on us and on carbon fibre recycling. Sometimes it’s better to buy the technology in rather than inventing yourself something that already exists.

“I see it day-in and day-out  — people wanting to do something that already exists in a fairly complete form somewhere else. Sort of like you said: pick your battles.”