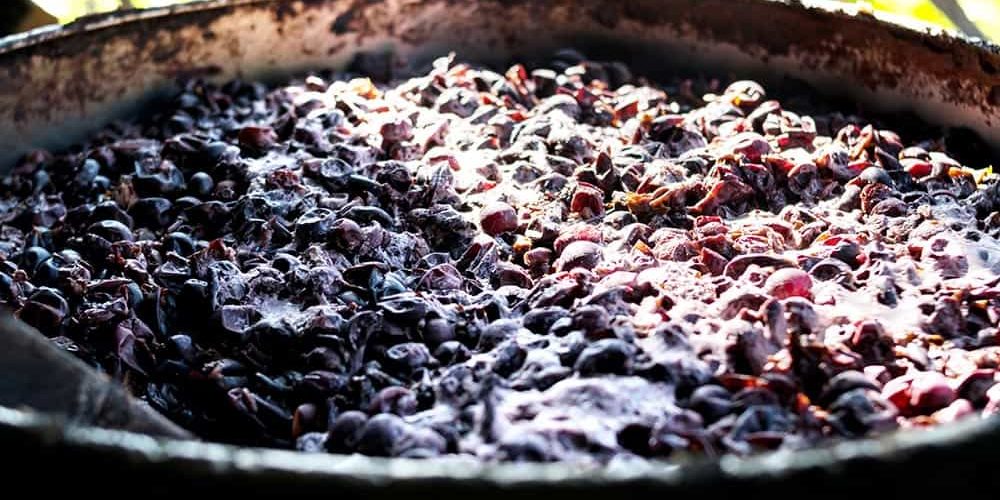 An Australian company estimates there’s $600 in valuable material sitting unused in every tonne of winery waste. Brent Balinski spoke to Professor Enzo Palombo about what’s trapped in there, and how to get it out.

Last week there was another announcement as part of a broader movement to find more value among unused agricultural products.

A collaborative project between Swinburne University, Viridi Innovations, Austeng, Swisse and the Fight Food Waste CRC will harvest grape seed extract from pinot noir marc. The processed result from 250 tonnes of the 2020 vintage will be marketed as neutraceuticals to customers in Asia.

The extraction process to be used has been validated at lab scale, and is moving to the pilot level. It begins with seeds being separated from crushed skins, flesh and stems.

“Then we take the seeds and we simply crush them, soak them in liquid that could be simply water or we might sort of tweak that,” the project’s lead, Swinburne Professor of Microbiology Enzo Palombo, tells @AuManufacturing.

“And then we just use that as a way of extracting the goodies: dry it down, purify it, and then that becomes the product.”

It is one possible way to cut down on vast amounts of winery waste. Approximately 1,730 kilotonnes of grapes were crushed last year. It’s been estimated that 15 to 30 per cent (by weight) of what’s crushed is leftover as marc: skins, seeds, stems etc. This has a small amount of value as low-grade animal roughage and fertiliser, though is slow to break down as compost and much of it becomes landfill.

Palombo estimates that, after optimisation, the current project could turn between four and five per cent of marc into extract.

Viridi aims to harvest much more out of grape pomace in the longer-term. The company believes there is $600 per tonne of value salvageable from wine waste, and is commercialising processes to create tartaric acid, sugars and polyphenols from this.

Viridi is part-owned by Swinburne, and has its origins in PhD work by Avinash Karpe, overseen by Palombo. Originally focussing on biofuels, Karpe developed a way to pretreat biomass and then break it down using a cocktail of fungi. A separate project backed by the Advanced Manufacturing Growth Centre is taking the Viridi process from the lab to an industrial pilot.

“When we spoke to people in the biofuel industry, they sort of went, ‘sounds good in principle,’ but the cost/benefit didn’t really stack up,” recalls Palombo of the early work.

“And that led us to think ‘what else is a higher-value product that we could look for? And that’s when the polyphenol antioxidants that are trapped in this material stood up as [having] real potential.”

Tartaric acid, used to adjust pH, is a major cost for wineries. Polyphenols are a booming market, and Viridi hopes to target demand for “clean and green” Australian products, including supplements.

Palombo is also involved in work to draw more nutrients out of pomace from tomatoes, olives, and apples.

“All these industries where you’re extracting something like an oil or the juices or whatever — there’s residue,” he says.

“And we feel that residue has untapped, inherently valuable compounds.”

Researchers at the CSIRO and elsewhere are focussed on extracting and stabilising biomass from food that might otherwise go to waste, such as highly-nutritious though discarded broccoli leaves. The FFW CRC is also supporting research to turn potatoes – with up to 40 per cent of these rejected by retailers – into highly-valuable starches.

This website has reported on the work of Natural Evolution, formed to turn green bananas which would be wasted into flour and other useful products, and on recent work to turn unsold bread into beer.

It’s estimated that primary production and manufacturing contribute just over a half of the country’s total food waste, which totalled 7.3 million tonnes over 2016/17.

“The next stage of this product could be looking at those compounds, specifically targeting resveratrol from the grape skin. Because the grape skin is still a residue from our process,” says Palombo.

“We’re trying to make it completely green, close the loop type of waste process… You get what you want out of the easy stuff, and then try to develop other technologies for the more difficult material.”